Developers may be highly skilled and experienced, but they still realize that hand-coding is outrageously time-consuming. When businesses need to meet growing needs, it’s difficult to retain enough software developers to fulfill demand. Applications miss their deadlines and quality suffers. As a result, the popularity of low-code is on the rise. Further, citizen developers are already using low-code to create custom business apps and more. According to Gartner, low-code will comprise over 65% of application development by 2024. So, what is low-code and why isn’t it just for citizen developers?

Using a low-code platform can flush out high quality applications

Low-code platforms offer visual diagrams, drag and drop interfaces, and connectors to create workflows, entities, and relationships. In addition, they provide event, action, and process definition. In the background, the platform writes the software, backend databases, business logic, and designs the user interface. Next, the applications can be built, tested, and deployed in the cloud.

It’s similar to rapid application development (RAD) tools like Visual Studio or Delphi where developers can access a visual designer to drag and drop a list of visual objects and then configure properties, actions, events, and data models.

The many benefits of low-code

Unquestionably, hand-coding under time pressures will often lead to errors that can affect application performance, reliability, availability, and usability. Some development teams may vary in terms of experience and background, therefore producing inconsistencies in code quality. Over the long-term, low-quality coding can spell disaster.

Using a low-code platform means that cyber security is already baked in based on industry standards and best practices. If the goal is to produce high-quality code at a rapid clip, low-code is the solution.

Also, developers enjoy the fact that low-code platforms are extensible and flexible. Low-code can be used to extend functionality of existing applications. You can also integrate third-party APIs without having to write any code.  Read more about extending low-code platforms with API Driven Architecture in Business Process Management

Not to mention that if CI/CD practices are not already part of the application workflow, then building, testing, and deployment becomes even more time-consuming and even clunky. However, a low-code platform automates testing and deployment to ensure a quicker delivery cycle. 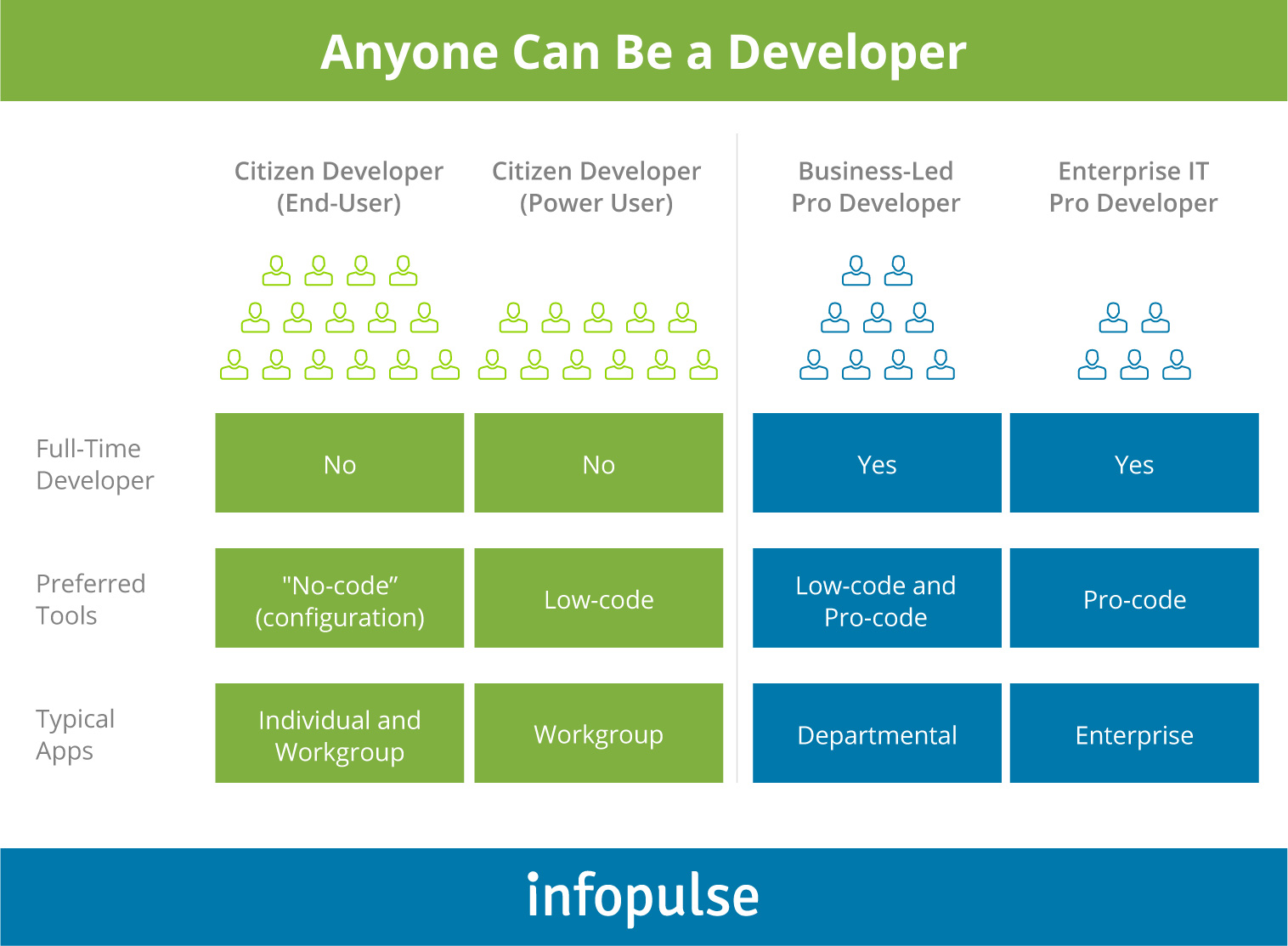 These days, every development team wants to be “agile.” Who doesn’t? Before low-code, the software development cycle would include prototyping to demonstrate the product to the intended users. On the other hand, low-code eliminates the need for prototyping because the drag-and-drop interface means developers can create a working application in the same amount of time it used to take just for prototyping.

Here are some other reasons why low-code isn’t just for citizen developers:

Low-code decreases the average workload and takes the pressure off developers. The code is reusable for any app as necessary. Since the code is reusable, developers will notice a significant decrease in application time-to-market. Low-code also saves time around testing, implementing security, and verifying reliability. Further, application development is truly scalable while developers can easily clear out their backlog and streamline their workflows.

Use the low-code advantage

Indeed, most code will be managed and written on low-code platforms in the future. Using visual IDE components saves on time, resources, and complexity. Once a low-code application is built, use a few clicks to debug, test, and deploy. Unquestionably, there is a reason why low-code isn’t just for citizen developers. It is the means for getting more done in less time. And, developers will have the ability to focus on strategic applications. If you’re interested in learning more about how low-code can optimize your development cycles, Processmaker is here to help.

Low-code app development is one of the top ways agile teams beat those companies still yoked by the traditional programming model. This top strategy for accelerating time to market shows no sign of...

There has never been a greater need for immediate digital solutions to corporate problems. Even though they are critically needed, IT resources to implement these novel concepts are becoming...

Believe it or not, to launch a simple word processor, you used to have to type in a command. It started a little something like this:  C:\ Now, we’re so used to clicking and tapping colorful...